April 17, 2014, 08:15 AMBDN, video, water levelsPermalink
John Holyoke's recent "Kenduskeag Rages" post in the BDN pretty much says it all.
Compared with the runoff of recent years, it's safe to say that the Kenduskeag is raging. Truly. (Although 2007 seemed even "rage-ier" to me somehow, if that makes any sense.)

Ray Wirth of Water Walker Sea Kayaks (Belfast, ME) paddled the Kenduskeag from Six Mile Falls to an area known as the Shopping Cart, and he shot an exciting helmet-cam video while doing so. Anyone who has (or will) sign up for the 2014 race should appreciate this.

During his stoke-worthy ride, Ray provides many insightful comments as he demonstrates what paddlers can expect on Saturday. It's an inspired way to preview some of the trickier parts of the Kenduskeag.

My own thoughts? Steer clear of strainers. Those overhanging or overreaching branches, brambles and bushes. You do not want find your boat snagged up in "the sticks" with such a forceful current. I always get a bit anxious when it comes to streams or rivers that have overflowed their banks.

PS - I think Ray's paddle is best viewed in full screen. You can almost feel it:

March 24, 2010, 11:26 PMriver, St. George, videoPermalink
Ray Wirth of Belfast (and Water Walker Sea Kayaks) has posted a nifty video on YouTube of his paddle down the St. George River on March 17th. The river looks good and hopefully our recent rains will have boosted the water levels a tad.

Update 3/25: According to this Bangor Daily News article, the recent rains have raised the river levels, and so the St. George is "...even better now. It’s so close to perfect it’s not even funny.”

And I'd be remiss in my blogging duties if I failed to mention John Holyoke's post race article.

May 07, 2007, 03:36 PMmedia, miscellaneous, photos, videoPermalink
As we await the race results (should be released any day now) I thought I would take a moment to post some interesting photos and videos from other folks.

Check out this photo gallery from Rhesá Gordon:

Rhesá Gordon - near the finish line in downtown Bangor

And take a look at these videos on YouTube. Pretty cool stuff.

Sparky Bob's Six Mile Helmet Cam Video
- This guy straps a video camera to his helmet just before heading into the maelstrom of Six Mile Falls. Cool first-person viewpoint of the rapids and Sparky's rescue. (Warning: there is some rather, umm.."salty" language in portions of this video...as you might well imagine).

Video Clips of the Kenduskeag Grab some popcorn and your favorite beverage. WLBZ has posted some Kenduskeag video clips (in 15 minute segments).
You can find them here.

And the Bangor Daily News did a writeup of the race today, check it out here.

A Quickie Video of Water Levels

Click here to watch the 2-minute video. (Nothing fancy, but it gives you some idea of the volume and swiftness of the stream.) Will be interesting to see how much this changes by race day. 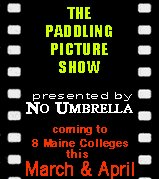 No Umbrella, Maine's alternative outdoor newspaper, is taking their Paddling Picture Show festival on the road to eight different college campuses in Maine over the next couple of months.

The editor of No Umbrella, Nick Callanan, asked if I could put something together for the traveling picture show to represent the Kenduskeag Stream Canoe Race. I was happy to oblige.

After choosing some of my favorite shots from the 2003, 2004 and 2005 races, I produced a 5-minute slideshow and it has been included in the festival. I will post the slideshow on the Kenduskeag Stream Canoe Race website at a later date; in the meantime, check out this cool show when it rolls into your neck of the woods!

April 14 Skowhegan Outdoor Expo Skowhegan, ME
Screening will be at the Skowhegan Recreation Building

April 19 7 p.m. University of Maine at Presque Isle
Please call the school or check back here for exact venue