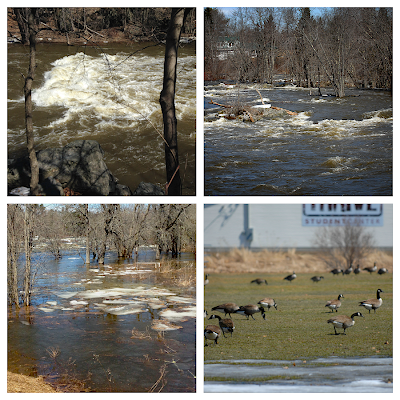 (larger view of the photo above)

My, how things have changed in a week!

And things will change even more before the race, so just take this early glimpse of the stream with a grain of salt. A teaser, if you will.

The Kenduskeag Stream is icing out nicely, with a current average height of 9.5 feet. The cfs? That's unclear at the moment as the USGS water gauge at the Kenduskeag currently reports "ice".

Let's put it this way, the water is moving. And there's still a lot of snowpack which has yet to melt.

There were "bergy bits" floating downstream but nothing major, although at one point I mistook a small iceberg for a white kayak. Whoops.

But it's the portage trails and the river vulture (spectator) areas which are troublesome. Seems like the paths and viewing areas are either frozen, flooded, or mushy-muddy.

I'll check back in another week. It was a nice spring day along the stream with a good number of Canada geese along Griffin Road.

PS - here's a short video clip of the area known as the Shopping Cart rapids, closer to Bangor - it gives you a small sense of the current flow: (Quicktime video - 4/10/14)